It was truly a dream season for Newberry Indians Defensive Tackle Ivan Oswald. The senior and team captain led the Indians both on the field and off, and for his efforts, Oswald has been named to the Upper Peninsula Sportswriters and Sportscasters Association’s 2020 All UP 8 Man Dream Team.

As one of the most dominant defensive linemen in the entire Upper Peninsula, Oswald often found himself in the perfect place to make plays. He finished the season with 80 tackles and six sacks, ranking him among the top players in both categories. Oswald was also named All UP in 2019. With Oswald in control, Newberry’s defense became dominant at times, giving up zero points twice and only one touchdown in two other games. 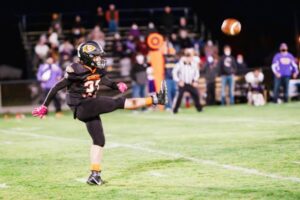 He wasn’t alone on the 2020 8 Man Football Dream Team. Junior Coleton Labadie, who Assistant Coach Zach Clickner often called the team’s “Swiss Army Knife” based on his ability and willingness to play any position, was going to end up on an All Star list somewhere, it was just a matter of what spot. Labadie spent time mainly as a running back, but also played some wide receiver in certain sets, and spent time in the secondary on defense. It ended up being on special teams where he shined the most. With an average of almost 39 yards per punt, multiple touchbacks, and even a few successful fakes for first downs, Labadie was selected as the Dream Team Punter for the 2020 Season.

Another Newberry Indian earned his second straight All UP Award. Senior Logan Depew, the lockdown corner that led the back end of the defense, just missed the Dream Team in voting, but still ended up with 1st Team All UP honors for his performance during the 2020 season. The All Conference Defensive Back, and 2019 All UP selection, wrapped up his career with 40 tackles, two interceptions, and 12 passes broken up. He was often matched up on the other team’s top targets and also showed a willingness to come up and play against the run.

Rounding out the list for the Indians was their All Conference touchdown machine Eric Edwards. In a year where everything he touched turned to gold, the junior tight end was named an All UP Honorable Mention. Edwards started the season as a primary blocking TE in the Newberry offense, but blossomed into a big play threat. Nearly every pass he caught turned into a touchdown. Edwards had nine total TDs on 11 catches, with 295 yards receiving, and did it all on just 15 total targets. The coaching staff expects big things from him next year, and named him an offseason team captain during their end of the season awards ceremony last week. 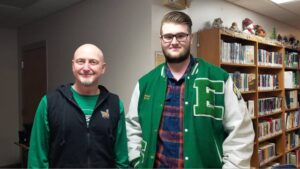 On the other side of M-117, the Engadine Eagles also had a player who earned All UP honors. Senior Lineman Nick Nance was named to 2020 All UP 1st Team. Nance has had quite the postseason on the awards circuit. He has been selected to the Great Lakes 8 East Division and All Conference Teams, was named to the MHSFCA All Region Team, and just last week was named All State by the MHSFCA. The Eagles senior dominated on the offensive line, and Nance’s play had earned him more than just awards. Colleges may soon come calling for the 6’5”, 325-pound lineman. According to Eagles Coach Vince Leveille, several NCAA Division 2 schools and even some D1 teams in the MAC are showing interest in Nance at the next level.

In the 8 Man Individual awards, North Central swept the voting, showing they were just as impressive off the field as they were on it. Jets QB Luke Gorzinski was named 8 Man Offensive Player of the Year while his dad, Leo Gorzinski was named the 8 Man Coach of the Year. The undefeated Jets made it all the way to the MHSAA State SemiFinals before their season was cut short by the shutdown. North Central was voted 8 Man team of the Year. One EUP player stood out on the defensive side of the ball as Cedarville Trojans Linebacker Grant Fountain won the Defensive Player of the Year Award.