The Munising Baptist Bobcats are heading into the holiday break with a win after defeating their H-58 rivals Grand Marais 58-27 at The Pit in Mather Elementary on Friday, Dec. 16. 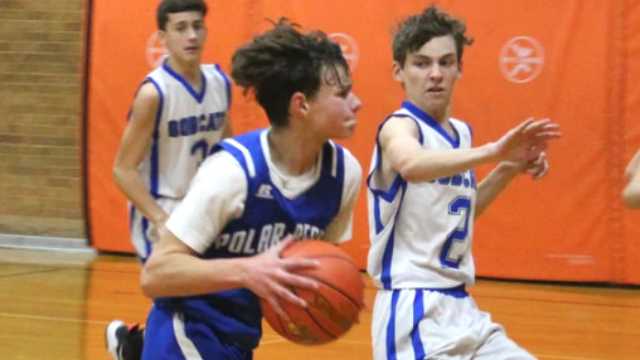 “This was a great game and a great win,” said Baptist Coach Ken Heyrman. “These games with Grand Marais are always intense; so glad to get the win.”

The game stayed close for the first frame with the home team holding a 12-8 lead after the first. But foul trouble started to hinder the Polar Bears. Munising Baptist hit the charity stripe with two minutes to go in the first quarter and multiple chances to extend the lead, doubling up Grand Marais 28-14 at half.

The Bobcats used the full-court press to hinder Grand Marais’s offense, stifling any chance of establishing their offense. While the Polar Bears were finding the right passes, either the player was too small to handle the pass or players were committing over and back violations.

“The press worked well,” Heyrman said. “After we got a lead, we backed off, but when they started to fight back a little bit, we started (the press) again.”

With help from the bench, the Bobcats were able to stretch out the lead in the second half, getting buckets from Zeke Meskill, Dylan Swift, and Gabe Heyrman. Munising Bobcats snagged 20 points in the final frame, the most of any during the contest.

For Grand Marais, it was another frustrating game against some of the toughest opponents the Northern Lights League could provide. The Polar Bears’ schedule is frontloaded with defending champions Maplewood Baptist, a deeper Big Bay de Noc team, and perennial contender Munising Baptist. Head Coach Devin Lawrence said that the team is focused on changes they can make in house, with plenty of opportunities for consistency after the game.

“We’re a young team looking to improve. Most teams already have it figured out by now, but we’re taking a bit to figure it out,” Lawrence said. “We have moments of brilliance and moments of expedited learning potential.”

Ryan Swift led all scorers on the night with 26, while Grand Marais’s Ethan Bell had 21. Dylan Swift was also in double digits for the contest with 13 points for Munising Baptist. All five starters and seven of eight players scored for the home team. The Polar Bears hit three of six from the free throw line, while the Bobcats were eight of 18 for 44 percent.

Both teams are done for the calendar year, with Munising 2-1 and Grand Marais 0-2. The teams will restart their seasons on the road, with Grand Marais traveling to Big Bay on Jan. 5 and Munising Baptist playing a doubleheader at Mackinac Island on Jan. 6-7. The two teams will play the second game of the rivalry on Jan. 12 at Grand Marais.