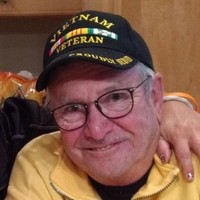 Born March 31, 1947 in Detroit, son of the late Frank and Ruth (Birnbaum) Noldy, Mark was a 1965 graduate of Berkeley High School. Mark attended college for one semester prior to being drafted and eventually enlisting in the United States Air Force during the Vietnam War. He honorably served as a jet engine mechanic until his discharge on April 28, 1970 attaining the rank of Sergeant.

On September 8, 1967, he married the former Susan Newton in Berkeley and resided in the Metro Detroit area. Mark was employed as a research technician at the Ford Motor Company/Dearborn research and development center for 32 years retiring in 2003 and, in 2004, Mark and Sue moved to the Upper Peninsula. Mark was one to never sit around as he found odd jobs as well as working at the Fish and Hunt Shop in Curtis.

Per request, cremation services were accorded with services to take place in the spring of 2020.

Memorials may be directed to the Wounded Warrior Project. PO Box 758516, Topeka, Kansas 66675-8516 or at www.woundedwarriorproject.org.