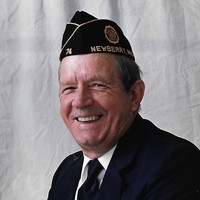 Born February 3, 1932 in Atlas Township, son of the late Ernest and Ellen (Moray) Green, Chuck was a 1950 graduate of Goodrich High School. On August 6, 1952, Chuck was drafted into the United States Army completing basic and armor training at Fort Knox, Kentucky. He served in Company “G” of the 29th Infantry Regiment during the Korean War until his honorable discharge on July 22, 1954 receiving the National Defense Service Medal and attaining the rank of Corporal.

In September of 1958, Chuck married the love of his life, the former Jacqueline Knight, in Ortonville, Michigan. Together they moved to the Newberry area in 1969 and raised five children. Chuck was employed as the assistant Park Manager at Muskallonge Lake State Park and Tahquamenon Falls State Park until his retirement in 1984, after 32 years with the Parks Division of the Michigan Department of Natural Resources.

Chuck was a proud lifetime member of the American Legion Post #74 in Newberry formerly serving as Post Commander. He was a lifelong fisherman, hunter, woodworker, hiker, and gardener and enjoyed canning, making pickles and maple syrup. He was the world’s best husband, father and grandfather who will be dearly missed.

In addition to his parents, Chuck is preceded in death by his siblings Gerald Green, Ernest Green Jr., Henrietta Cousins, LG Green and Ellen Jean Tottingham.

Friends may call at the American Legion Post #74 in Newberry on Thursday January 2, 2020 from 2:00 pm to 3:00 pm. A memorial service celebrating the life of Chuck will follow at 3:00 pm at the Post with Pastor Tim Callow, of the Newberry United Methodist Church, officiating. Full military honors conducted by the American Legion Post #74 and the United States Army Honor Guard will follow the memorial services.

Memorials may be directed to the American Legion Post #74 or to the Upper Peninsula Honor Flight, 7508 J Road, Gladstone, MI 49837 or at www.upperpeninsulahonorflight.org in his memory.