It has been nearly a week since 31-year-old Channelle Leigh Dennard – affectionately known as Sunny to her family and friends – went missing near the Mackinac Bridge in Mackinac County. 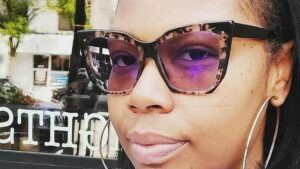 Dennard is originally from Southfield, MI, and was last seen leaving her home there Tuesday, October 27 between 11:00 and 11:30 am. Her last communication with friends or family was around 12:30 am Wednesday, October 28.

On October 28 between 5:00 and 5:30am Dennard’s 2011 blue Chevrolet Equinox was seen travelling north in the southbound lanes of the Mackinac Bridge. The car then crashed through a tollbooth at high speeds, possibly losing a tire in the process.

The car was found a short distance later in a ditch near Association Road by a semi-truck driver. The headlights were on, driver’s door open, a tire was missing, and there were no people in or around the vehicle. All of Dennard’s belongings were found in the vehicle, including her cell phone, purse, and glasses.

The following day, Thursday, October 29, police continued searching on land and in the water. A set of footprints were found heading down the dunes by her car toward the water. Police utilized a helicopter and drones to search the water, while K9 units and officers searched on land, with no results.

Searches continued Saturday, with family and local volunteers showing up to assist. Search team members were advised that Saturday would be the last day they would officially search the area due to a lack of leads and incoming weather.

Police have labeled Dennard as “Missing and Endangered.” She may be suffering from mental health issues.

Anyone with information about Channelle’s whereabouts should contact the Michigan State Police – St. Ignace post at 906-643.7582 or Crime Stoppers at www.TipSubmit.com. The family has set up a Facebook page, FINDING CHANNELLE, to keep the public updated on any developments.