Michigan communities will soon benefit from the addition of 50 state troopers who graduated this afternoon from the 140th Trooper Recruit School. 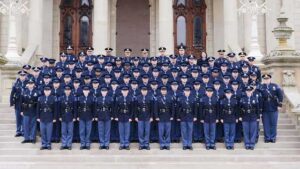 During the ceremony in Lansing, in which Gov. Gretchen Whitmer was the keynote speaker, Col. Joe Gasper, director of the Michigan State Police (MSP), administered the Oath of Office to 50 individuals who begin their assignments at MSP posts across the state next week.

“I’m so proud of the 50 graduates who join the ranks of the Michigan State Police today,” said Governor Whitmer. “Public service is a noble calling and one with great responsibility. Every family in every community wants peace of mind that so they can go to work, drop their kids off at school and run errands safely. As a former prosecutor, public safety is a core issue for me and I will keep working with the MSP to reduce crime and keep families safe.”

Five of the new troopers have been assigned to the eastern U.P.:

With hundreds of trooper vacancies due to continued attrition, the MSP is actively recruiting for future trooper recruit schools, including 142nd Trooper Recruit School. Persons interested in learning more should visit www.michigan.gov/MSPjobs for information on how to apply.