There’s good news on the vaccine front: Michigan seniors above age 65 are now eligible for the COVID vaccine.

There’s a caveat: There isn’t currently enough vaccine for everyone who wants it. Getting vaccinated will be a start-and-stop scenario, with bursts of vaccinations happening when new shipments arrive. 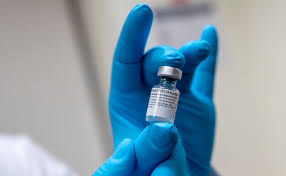 Though local health officials originally stated there would be no waiting list, it turns out it has been necessary to make one. Seniors who want the vaccine can use online scheduling at the LMAS District Health Department site – LMASDHD.org to put their name on the list. From there, they just have to wait for a phone call.

“We all have some vaccines right now,” said Kerry Ott, public information officer for LMAS. Ott said the district and hospitals within its four counties received a total of 2,940 doses of the vaccine, and that 1,340 of them have been administered to health care workers. The rest is now prioritized to senior citizens, and agencies like law enforcement, fire fighters, CPS workers, day care workers, and teachers.

The shortage of vaccines isn’t a local phenomenon.

“It’s the whole world,” Ott said. “There’s a lot of moving pieces. It’s a lot of arms to get vaccines into twice.”

While the original doses shipped to our region have been from Pfizer, Ott anticipates follow-up vaccines will come from Moderna as well.

Governor Gretchen Whitmer has been making efforts to secure more vaccines in Michigan and asked the federal government to release more. After receiving no response at first, she then sought approval to purchase 100,000 more vaccines. Word came early yesterday that the U.S. Department of Health and Human Services agreed to release millions of doses of the vaccine which had been held back from distribution.

When there is more vaccine available locally, there will be several places to get it. The vaccine will be administered by appointment at Helen Newberry Joy Hospital, at the LMAS District Health Department, and Hometown Pharmacy. Ott said additional partnership locations may be developed in an effort to avoid a bottleneck of people at any one facility.

That’s because local interest in the vaccine is high. Within two days of making sign-up available on the LMASDHD.org website, Ott said more than 1,000 people had signed up. She thinks that’s fantastic news.

“We are so grateful for the number of people who want the vaccine in our four counties,” Ott said.

The vaccine itself, which does not contain the coronavirus, is widely declared safe and effective. Local health care workers who have received their first dose reported having a sore arm and some fatigue after, but quickly rebounded.

Ott received her first vaccine three weeks ago, and her second one yesterday. The first one was “easier than a flu shot”, she said. Some of her counterparts who’ve had the second shot noted a few more symptoms than in their first: A fever and a headache, she said. Those went away after a day and some ibuprofen, and are not a sign of contagious infection. The COVID vaccine cannot give a person COVID, Ott said.

Now that the vaccine is rolling out, Ott is asking everyone to stay patient and trust that if they’ve put their name on a list for a shot, they will receive one as soon as possible.

In the meantime, and even after, she says it will be important to keep doing the “small things” that are helping our community get through the pandemic: Wear a mask. Wash hands. Stay home if you’re sick.