Before we move forward (and while we wait for what’s next), we are taking a look back at the best sports moments of the year. Who were the top athletes? Who is an upcoming star? Let’s take a look at the best from this year’s local sports scene. The Newberry News and M-123FM proudly present the 2020 Year in Sports Awards. 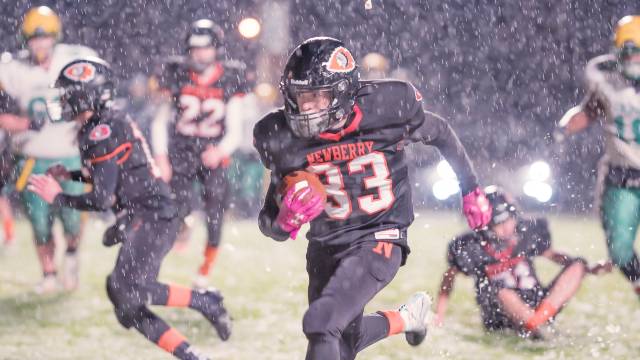 Logan Depew – He consistently finished near the top of the team runners for the Indians cross country team, and was an All UP 1st teamer on the football field.

Ephram Evans – The dual sports star shines both on the track and on the trails for Newberry High School.

Luke Jordan – “Cool Hand Luke” was a sharpshooter with incredible range and a soft touch that could light any gym on fire.

Ivan Oswald – His playoff performance against Onaway helped the Indians earn their first ever postseason win in 8 Man Football.

Logan Depew – Making the most of both seasons that he got to play, Depew was a leader wherever he went. He was the Newberry basketball team’s 2020 MVP, earned All Conference and All UP honors on the hardwood and had a great late season run that sparked the Indians in the district game against Rudyard. The senior still has high hopes for baseball too, where he is also a star pitcher and shortstop for the Newberry baseball teams that lost their spring season.

Ian McArthur – Built like a guard, with the strength to play in the post, McArthur became Coach Walter Hanson’s Swiss Army knife.

Nick Nance – Big, strong, agile, and smart, Nance earned All Division, All Conference, All UP, and All State honors.

Conrad Spieles – A consistent head-of-the-pack performer, he held his own and beat some of the best runners around.

Conrad Spieles – Spieles was an All-State award winner, leading the Eagles cross country team to new heights. He will be remembered as being the top runner on a team running during one of the most competitive times in recent history.

Kaylen Clark – Clark overcame a serious knee injury to peak at the right time this fall earning All State Cross Country honors for her 11th place finish at UP Finals.

Brenna Pavey – A four-sport varsity athlete, Brenna is praised for being reliable, consistent, and a leader on the floor.

Katie Rahilly – This girl is the best at whatever she tries. Basketball, volleyball, softball, hockey. How does she do it?

Bailey Zellar – Zellar was a key call-up who developed into the starting point guard for the basketball team, would have qualified for multiple events at UP Finals in track, and was a standout on the volleyball team.

Katie Rahilly – Laser-focused and intent to win, Rahilly makes it all look easy. Whether it’s Friday night basketball in DeTour or driving straight through the night for Saturday morning hockey in Detroit, Katie Sue is a sure bet. 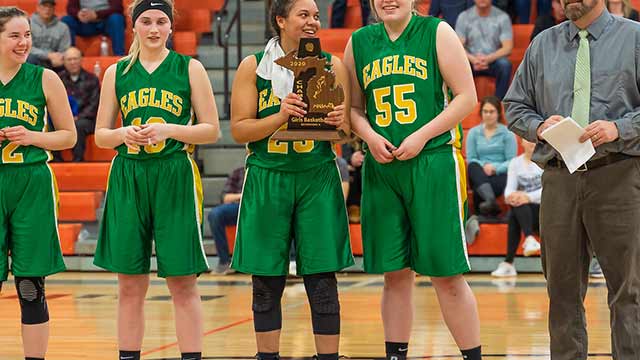 Camille Crandall – Explosive and athletic, with a blend of strength and quickness that can strike fear into opponents, Crandall’s signature jump serve became an elite move for Engadine’s top volleyball player.

Leah French – An impact player on a district title winning basketball team, she helped lead the Lady Eagles all the way to the regional finals.

Leah Gould – Gould is the leader of the Lady Eagles cross country team, and is constantly improving despite having so much success.

Sophia Vaughn – Conference Player of the Year, All EUP Conference, All UP, AP All State, 1,000 Career Points, District Champion, Regional Finalist – her story is amazing.

Sophia Vaughn – The others are deserving, but only Vaughn is in the conversation as the greatest Lady Eagle of All Time.

Coach of the Year

Joe Austin, NHS Football – The ol’ ball coach came back to transition the Indians into an 8 Man program and get them into the playoffs. He succeeded.

Jim Dzelak, NHS Girls Basketball – The development of young or lesser experienced players, such as Bailey Zellar, and this past season with Mackenzie Dunbar and April James, shows you he values every player.

Roger French, EHS Girls Basketball – French’s teams took down some of the top teams in the EUP Conference, ran through Rudyard in the District Championship, and won their regional semifinal for a shot at St. Ignace.

Walter Hanson, EHS Boys Basketball – Hanson has a keen ability to turn what he teaches on the floor and translate it to everyday life.

Ben Rahilly, French Trucking Hockey – Rahilly seems to coach with magic, from Little League and youth football up to a run of a state championship hockey team. His work meshing three towns into one team and leading them to the doorstep of history gets him a 2020 mention.

Jason Tokar, NHS/American Legion Baseball – No coach worked harder to get kids back on the field this year than Tokar. He made his program independent, accepted the workload that came with it, and salvaged summer when kids needed it most.

Roger French. Congratulations on achieving 100 wins, and leading your girls to the semi-final championship game this year. French is pictured above.

Team of the year

French Trucking 14U Hockey Team – Instead of coasting to another championship, they went looking for the biggest and toughest teams they could find. Another classic showdown with Cadillac in Petoskey, a District Title on their home ice, and a trip to the State Finals in Kalamazoo were part of the journey for 2020’s top team. They combined players from three towns that used to compete against each other and practiced in a different place every time just to have a team. They dominated everyone they came across in the UP. Congratulations on another beautiful season.

Who’s next: Athletes to watch

Time now to take a look into the future. Who will we be talking about this time next year?

Matthew Rahilly – He may be our best local athlete, and he’s only in 8th grade. He’s got incredible size and skill for his age, plays every sport at a high level, and is one of the best teammates I’ve ever seen.

Ethan Pavey – Don’t be surprised if you see “E” on the varsity football field at some point next year. He rarely missed a play in two seasons for the middle school football team.

Kaylen Clark – She rewrote the middle school record book for running and if she is 100% in 2021, look out. She will make a run at the high school records as well.

Perrson McKeage – Only a freshman, he has already earned the starting QB spot for the Eagle football team. If he wins the job again next fall, he will certainly end up being a four-year varsity starter.